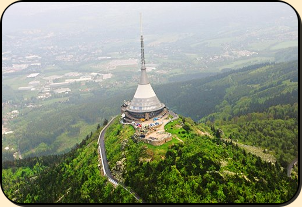 What to visit:
A unique building that became the dominant of Liberec and the whole region is the transmitter at the top of Ještěd. In the years 1966-1973, the construction of a television broadcaster, built according to the project of Karel Hubáček, took place. The building was awarded the Perret Award and was also awarded the Building of the Century. The height of the transmitter is 93 m. The cabin cable car leads to the top of Ještěd. On the ground floor there is an indoor walk-in gallery, you can also visit the restaurant on the floor of the transmitter.

You can also admire the Valdštejn houses in the Větrná Street. They are the oldest preserved houses in Liberec. They are from 1678-1681. These houses were originally inhabited by craftsmen. Christmas markets are held every year there. Here you can buy traditional Christmas ornaments, figurines and candy.

Other attractions:
Just like most people in western, Central and eastern Europe, you probably don’t know that Liberec stands at the cradle of motoring in this part of the world. Indeed, it was here that the very first motor car in Bohemia first appeared. In 1893, local industrialist and adventurer Baron Theodor von Liebieg ordered a Benz Victoria, which was to cause him a certain amount of hassle.

The car frightened local horses, drew the crowds and was the subject of repeated, prolonged and delicate negotiations with both customs and police officers.

The venerable baron used this vehicle for the first long-distance run from Liberec to Gondorf near Koblenz. He managed an amazing 939 km travelling at a staggering average speed of 13,6 km/h. During the journey, the car consumed an average of 21 liters of petrol – and as much as 150 liters of water – per 100 kilometers. On the way, he popped in to see Karl Benz, from whom he had bought the car in the first place. Baron von Liebiegs fondness for motor cars also led him to found the RAF car factory in Liberec. You might like to know that Liberec was also the home town of world-famous automotive builder Ferdinand Porshe. The first Czech Formula I driver is called Tomáš Enge, and, that’s right, he is also from Liberec. Learn more about this very interesting city using the personalized service of our English speaking driver.