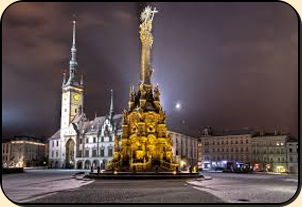 The city of Olomouc is the center of the Olomouc Region and one of the university towns in the Czech Republic. It is the second largest monument area and offers many attractive places. You can visit monasteries, fountains, museums and for example the zoological gardens. The pride of the city is the Baroque column of the Holy Trinity on the Upper Square, which is on the UNESCO list.

What to visit:
The Baroque Column of the Holy Trinity: measuring 35 meters and belonging to the highest pillars in the Czech Republic. It is one of the most dominant of the Upper Square.

The Gothic-Renaissance Town Hall with its Astronomical Clock, which is also located on the Upper Square too. The first dates mentioned go back to 1378. The clock production takes place every day at noon. Also interesting is the town hall tower 76 m high, from which there is a beautiful view of the surroundings.

You can also visit the remnants of the Premyslid Romanesque Palace from the 12th century, the Gothic cathedral of St. Wenceslas, which is inherent to the panorama of the city, the Olomouc walls, which have been preserved in fragments and are part of Olomouc parks and, of course, the well-known baroque temple on Svatý Kopeček.

History connected with Olomouc city:
Wencelas III, the last Bohemian king, of the Přemyslid dynasty, was apparently a very talented youngster. For all that, however, he was a typical teenager and there are all sorts of stories about his rather wild typically adolescent behavior. At the age of 12 he was crowned King of Hungary. In 1305, his father Wenslas II died, leaving him further two kingdoms – those of Bohemia and Poland.

Surrounded by enemies, he decided to give up the Hungarian crown and concentrate on holding on to power in Poland. In the summer of 1306, at age of 16, he set out with his army to liquidate the Polish claimant to the throne, Wladyslaw Lokietok.

He reached the town of Olomouc at the beginning of August, where he wanted to make the last stop on home territory. And that sealed his fate. On August 4, 1306, someone managed to enter his bedroom in the palace and kill him while he was resting. Who killed Wenceslas III and why remain two unanswered questions. All we know is that he had so many enemies, he should have been a little more careful. But then you know what teenagers are like! If you travel from Prague to Olomouc with our professional driver, don’t forget to visit a Přemyslid palace where the Přemyslid kingdom came to its final end after ruling Bohemia for over 450 years.