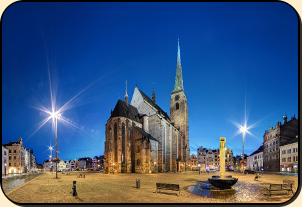 The town of Pilsen is the center of the Pilsen region. It is the fourth largest city in the Czech Republic. Pilsen is known as an industrial and brewery town. The most important sights of the city include the historic city center and surrounding streets, which are protected as an urban conservation area.

What to visit:
The three-nave Gothic temple of St. Bartholomew is located on the historic Republic Square. The most precious monument in the temple is the sculpture of the Pilsen Madonna, a sculpture of Calvary. The temple is richly decorated with colorful windows is worth seeing.

You can visit the historical underground of Pilsen during a guided tour. It was built gradually with the foundation of the city in the 14th century. Cellars and corridors served as food stores and in the time of danger the city provided shelter and escape routes to local people.

You can also visit the Brewery Museum, which is located in the original Medieval brewery house and is the oldest of its kind in the world. Here you will find the story of beer from antiquity to the emergence of large industrial breweries. The Great Synagogue, the largest building of its kind in the Czech Republic, the second largest in Europe and the third largest in the world. It is built in Mauritius-Romanesque.

Famous Beer:
Pilsen might not posses any magical mineral water, but it does have its world-famous and very healthy beer. If you visit the Brewery museum there, you will find a barrel made from honey-colored glass in the curiosity department. This was used to transport Pilsner beer to the Vatican in the 19th century. You see, the Pope at that time considered authentic Pilsner beer as a medicine to cure certain of his ailments.

Also interesting is the massive beer mug carved out of one piece of wood. This was made by a skilled Russian who obviously had a lot of time to spare during his stay in Siberia. You can also see the smallest barrel in the world. It holds just 1cm3 of beer, i.e. just enough to inebriate a sparrow. It was made by a cooper called František Stejskal using the same technology used to make full-size barrels. During the excursion in many and many of the local pubs you will taste lots of kinds of beer, but don’t worry your personal chauffer will take you back to the hotel safely.