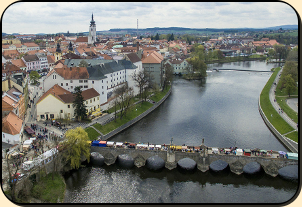 The town of Písek is located in the Southern Bohemian Region about 1.5 hours from the capital city of Prague. The historic center is an urban conservation area. At the heart of the city is a large square, divided by a block of houses into two approximately equal parts – the western part of which includes the castle and the eastern part, which formerly served as a market place. Remains of city fortifications such as the remains of the famous Putim Gate are still preserved

What to visit:
The Gothic castle in Písek, which was founded together with the town in 1254.
The early Gothic stone bridge from the 13th century is the second stone bridge in Bohemia after the destroyed Judith´s Bridge in Prague and one of the oldest preserved bridges in Europe. It was built in a dry place and after completion the river was taken to a new riverbed. The bridge was a very important connection on the way called the Golden Path. The replicas of Baroque sculptures are located on the bridge.

The dominant feature of the city is the Church of the Nativity of Virgin Mary at the highest point of the historical center of the city.

You can also visit the Baroque Marian column in the eastern square or the newly built path of painful stones – the crossing path of modern man.

Golden Sands in the Otava River:
Panning gold in the River Otava started in ancient times. Gold found there was used by Celts to make jewelry as well as the first coins to be used in this region. After them, many other settlers came to the region to search for this valuable metal in the sand in the river. Sand in Czech in Písek, and that is how the town of Písek got its name. By the 14th century, almost all the gold in the River Otava had been „panned out“, so the people here had to resort to mining techniques.

Several gold ore mines appeared near the town. At the end of 1966, during building work on a new sewage plant by the Otava, workers discovered the torso of the wooden construction and many circular mill stones and their fragments. And that was quite a find, as it involved the discovery of what is thought to bet he oldest medieval gold ore mill in the world. The millstone was driven by a waterwheel. The ground ore was then poured onto a wooden sluice covered with fur. The water washed away the ground rock and the heavier fragments of gold were caught in the fur. All they had to do then was to wash the fur in a vat and scoop out the gold with a bowl. This story might encourage you to jump into the water and start gold-washing, but unfortunately you cannot travel wet in our cars.