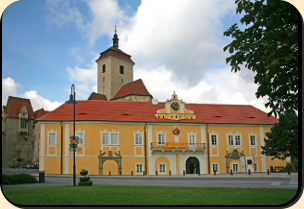 The town of Strakonice is located a short distance from the towns of Pisek and České Budějovice in the South Bohemian Region. There are many historical monuments in the city, the most important of which is the Strakonice castle. On the Big Square in the center of the city are the historic houses with rich façade decoration. The interesting feature is the building of Česká spořitelna with sgraffito decoration, the building of the former town hall and the smoked product shops.

What to visit:
At Palacky Square you can see the dominant Baroque Marian Column.

You can also admire the replica of Stonehenge, built by Ing. Pavel Pavel.

An important monument of the city is the Strakonic castle, founded around 1200 by the lords of Bavor.
The original corridor with brick ribbing and wall paintings is interesting. The dominant feature of the castle is the tower called Rumpal. Strakonice Castle became the main seat of the order of the Johannites. Later, the castle was rebuilt and another tower was added – Jelenka. At the beginning of the 17th century the chateau and gardens were modified in the Baroque style.

Points of interest in the surroundings Strakonice:
What has Strakonice in common with the moai on Easter Island and Stonehenge in Southwest England? The answer has to do with replicas, and specifically Pavel Pavel, who is a kind of replica in himself as few people in Europe have a forename that is the copy of their surname. You see, it was Pavel Pavel, an enterprising engineer from Strakonice, who solved the mystery as to how the moia statues “walked” around Easter Island.

In the end he showed how just 17 people were needed to make the statue “walk”. That was in 1982. Four years later, he was invited to join a Thor Heyerdahl expedition to Easter Island itself to repeat his experiment, this time using an original statue. And guess what! He was again successful. Pavel Pavel, however, was not satisfied just with solving the mystery of walking moia statues. He also solved the even older mystery of how the lintels or capstones were placed on the uprights at Stonehenge. This is why you can see a life-size replica of part Stonehenge on the left bank of the River Otava. And at the risk of repeating ourselves, we invite you to come to Strakonice with our driver to see for yourself.